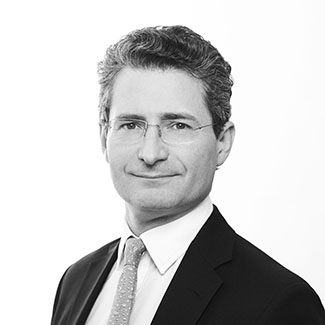 Mainly handles international work and regularly appears before the High Court and the Court of Appeal, representing an impressive clientele of high-profile individuals. Warshaw is frequently instructed in cases involving offshore jurisdictions including Hong Kong, Gibraltar and Jersey. Strengths: "He's a good details person and brings this cerebral, intellectual approach to his advocacy." "He's good at putting clients at ease and making them understand key issues." "Whatever the situation, he pushes until he has a thorough understanding of it."

Justin was called to the Bar in 1995 after graduating from Christ Church, Oxford. Given “extensive praise for his skill in handling substantial financial remedy proceedings” (Chambers & Partners 2015), he is applauded as “a brilliant and polished advocate” (Chambers & Partners, 2014) and “a great tactician with huge compassion and patience” (Legal 500, 2014).

Justin is a financial remedies specialist who relishes complex and challenging cases where his wide array of skills can be deployed to their full advantage.  Respected by his peers and with a loyal following amongst his instructing solicitors, he understands both the technical nuances and emotional dynamics of family law and is adept at building trust and rapport with clients.  He is “star of the future” (Chambers & Partners, 2012), with “an ever growing reputation for matrimonial finance work” (Chambers & Partners, 2011).

Justin’s international practice has involved participation in cases in many overseas jurisdictions including Canada, Gibraltar, Jersey, the Isle of Man, Hong Kong and Singapore.

All matters concerning divorce and the breakdown of family relationships.

"He's a good details person and brings this cerebral, intellectual approach to his advocacy." "He's good at putting clients at ease and making them understand key issues." "Whatever the situation, he pushes until he has a thorough understanding of it."

"Justin is very colourful, enthusiastic and experienced, and his cross-examination is very creative." "He is conscientious, hard-working and fearless. He's very good on the law, excellent in court and no-nonsense. He subtly persuades the court to go along with what he wants to achieve and is very good in cross-examination."

“Newly appointed silk with an impressive clientele of high-profile individuals and public figures. He mainly handles international work and regularly appears before the High Court and the Court of Appeal. Brilliant on his feet, he instinctively cuts through a case to the killer points, bringing the judges with him. He gets unbelievable results."

“Specialises in complicated, high-value financial matters and has a practice with an increasing emphasis on overseas work. His peers describe him as ‘fun to work with and appropriately tough. He is very no-nonsense, and he can be direct but in a positive way. He constantly e-mailed with thoughts and various points and was very receptive, seeing things as a team effort. He works with his solicitors, puts the case to the best of his ability and is not shy of making difficult arguments."

“Receives extensive praise for his skill in handling substantial financial remedy proceedings. He is often sought out for his expertise in very complex and high-value multi-jurisdictional disputes. He is fantastic, a real force to be reckoned with, and excellent for high-value cases. He is as tenacious as a terrier with a very large rat.”

“An eminent junior, who handles complex financial work.  He is highlighted in particular for his expertise with international matters, and has undertaken cases involving Gibraltar, Hong Kong and Jersey. He is a brilliant and polished advocate, who is extremely impressive on the technical side too.  He is diligent and methodical but also invariably comes up with interesting insights into any case he is instructed in.”
Recent Work: Appeared in Shagroon v Sharbatly, a case concerning a billionaire businessman.

Justin Warshaw is a go-to junior for complex financial cases.  Such is his knowledge that instructing solicitors also seek his advice on matters involving foreign jurisdictions such as Canada, Gibraltar, Hong Kong and Singapore. Star of the future” [he] recently acted unled on behalf of an Italian heiress in Traversa v Freddi, a case that attracted widespread media attention. Sources praise his “ability to give realistic advice and fight his corner hard.” Warshaw is seen as being on the up.”

“Popular, [he] is good at the detail but, crucially, doesn’t get bogged down in it: ‘ He doesn’t waste time but gets straight to the nitty gritty’ ”

“[He] moves up the tables this year having developed a reputation as a ‘force to be reckoned with’ as ‘he gets to grip with a case in no time at all.’”

“A very bright and tenacious advocate”

“Bright and responsive; he can take hold of a money case and knows what to do with it”

“His prime characteristic is a willingness to take things on and prepare them thoroughly. He is often seen in tandem with Martin Pointer QC, the pair making an immaculate combination”

“Another of the younger breed to catch the public eye working alongside Jeremy Posnansky QC. He displays the proactive nature essential to a good junior”

"Cares very deeply about doing his best for his clients."

"His advocacy style is among the best at the family Bar.”

"Very worthy of his reputation."

“A great tactician with huge compassion and patience.”

“An excellent and persuasive advocate”

‘A silk who combines strong forensic skills with the ability to argue any point from any angle. He has the ear of the judge.’

Justin is married to a professional singer. They have two daughters. He enjoys photography and sometimes writes reviews for the TLS.