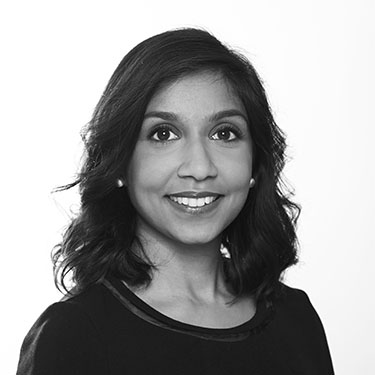 Madhavi combines a rigorous intellectual approach and formidable court room style with an approachable and compassionate manner. Her practice involves representing high net worth individuals including, by way of example, a Duke, an internationally acclaimed artist; a former premiership footballer; an eminent QC; and a TV soap opera star. She has also represented a multi-national company, CEOs and captains of industry.

Madhavi is instructed in cases of the utmost value and complexity (both on her own and led by Queen’s Counsel) including those with complicated trust structures, for example offshore trusts in tax havens and ‘old money’ trusts. She is also regularly instructed in cases with other types of sophisticated asset structures such as corporate entities with SPVs as well as cases with multiple and/or complex income streams.

Madhavi has also appeared in some of the most significant reported cases of recent years including:

Mansfield v Mansfield [2011] EWCA Civ 1056: one of the leading authorities on the treatment of personal injury awards in the context of financial remedy proceedings (led by Richard Todd QC).

Traversa v Freddi [2011] EWCA Civ 81: Madhavi appeared in the Court of Appeal (led by Justin Warshaw, now Queen’s Counsel) in this case, one of the foremost authorities concerning financial provision after a foreign divorce pursuant to Part III of the Matrimonial and Family Proceedings Act 1984.

A v L [2011] EWHC 3150 (Fam): Madhavi has appeared on her own in the High Court in an appeal hearing before Mr Justice Moor concerning a significant departure from equality.

Madhavi studied at the Henrietta Barnett Grammar School for Girls before reading Law at the London School of Economics and Political Science.

She was called to the Bar in 2008 following successful completion of the Bar Vocational Course at the College of Law in Bloomsbury.

Madhavi was an avid theatre-goer and enjoyed seeing the latest West End plays BC (Before Children!). These days she enjoys long walks in Greenwich Park near which she lives with her husband, son and daughter.